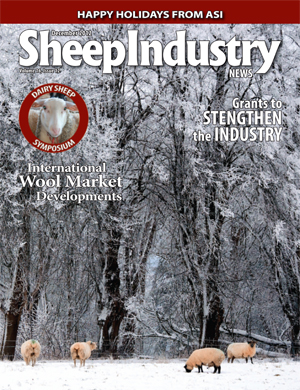 (December 1, 2013)  Burton Pfliger, secretary/treasurer of the American Sheep Industry Association (ASI), was upbeat about the lamb and wool markets as he talked with farm broadcasters during Trade Talk, the main event of the National Association of Farm Broadcaster’s National Convention.

More than 100 broadcasters circulated among participants during the six and one-half hour event to gather news stories to broadcast to the nation’s rural communities to keep them informed of current events within the many agriculture industries.

It has been calculated that 2,360 interviews are accomplished and that those interviews have a collective air-time value among member stations and networks of $543,177.

Topics covered by Pfliger ranged from the positive trend of lamb prices over the last few months to the continued use of American wool within the U.S. military. Conversations covering the upcoming ASI convention in Charleston, S.C., available funding for flock expansion, sheep priorities for the 2013 Farm Bill and country-of-original-labeling were also common.

The NAFB convention was held in Kansas City, Mo., on Nov. 14. Pfliger represented the sheep industry.