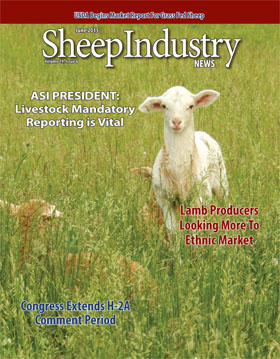 The new Department of Labor proposed H-2A rule, should it be implemented in its entirety, would have long lasting and dramatic effects on the entire sheep industry. The 150 plus page proposed rule would make wide sweeping changes to much of the core working principals that has made this a successful program for more than 50 years. This existing program is the most successful, legal and best documented program for immigrant workers in the United States. The H-2A sheep herder program with special procedures has served as a model for other documented immigrant worker programs in a variety of agriculture industries.

The fact that this is a legal well-documented and the most successful immigrant worker program should not be lost on those legislative leaders you have communications with.

Many of the proposed changes, such as the dramatic effect on wage rates, would put many producers in very difficult financial circumstances. The definition of “open range” without any fencing would make many managed grazing application off limits. Places where fences are used to manage harvesting of forages in targeted grazing applications would no longer be allowed to employ H-2A herders. Limits on housing, communications and scope of work along with others too numerous to mention in this article would also be impractical to manage and execute.

Earlier last month, most of you should have received a “Call To Action” letter or email from the American Sheep Industry Association asking each of you to contact the Department of Labor and your legislative leaders highlighting the adverse effects this proposed rule will have directly on your sheep operation or indirectly upon the entire industry. Cumulatively, some 9,000 emails and letters were sent. Hopefully, each producer was able to accomplish that task. A big thank you to each of you who followed thru. Your combined efforts continue to enable each of us to enjoy the blessings of living and working an agricultural lifestyle and belonging to the 2 percent who feed America.

At the time of writing of this column, under the leadership of ASI, Western Range Association and Mountain Plains Ag Services, the sheep industry has been successful to push back the comment deadline from May 15 to June 1. ASI has engaged some economists to put some real numbers, values and dollars to demonstrate the economic losses each producer would suffer and the real world economic losses each of our communities, counties and nation will endure with the loss of a large section of the sheep industry. Please keep your members of Congress in touch with this issue as the Department of Labor processes comments for a final rule this fall.

With all that said, sometimes it is easy to become negative or have a defeatist attitude about working with government and regulatory agencies. Let me recall for you the mood and feelings of just about 14 months ago when the hurdle placed in front of sheep producers was the U.S. Forest Service frame work for bighorn sheep management. That plan intended to announce loss of sheep grazing allotments by February of 2015. Similar to the Payette Forest situation in Idaho, the plan would remove grazing without any sustainable way for the ranchers to replace that livestock forage and force them out of business. Due to the actions and cumulative efforts of ASI legislative leaders and state associations, we have legislation prepared to insert into federal statute to direct fair treatment of sheep ranchers impacted by the bighorn management.

The legislation needs to be included in the Interior Appropriations, so June is a critical month. In fact, we learned in mid- May that Utah sheep producers have been informed of several grazing allotments to be closed and reduced beginning in 2017. All the more reason to ask your congressmen to enact the ASI supported language.

The Forest Service now proposes cancellations on areas where a “calculated risk” of bighorn and domestic sheep may interact. ASI and producers are requesting if allotments are cancelled or restricted, alternative allotments of similar type be provided first. I am not declaring victory on this front yet but we have a plan and united support to ask Congress for this appropriate resolution of this threat.

Two bicameral bi-partisan letters from Congress have been sent to the Administration on this bighorn controversy so we have at least three dozen Representatives and Senators working with us, which we greatly appreciate.

Also recall last June, when the Obama administration and USDA-ARS blindsided the sheep industry, U.S. Congress, state governors and local officies with the notice to close the U.S. Sheep Experiment Station at Dubois Idaho. While still on President Obama’s 2016 budget to close, the leadership and membership of ASI was successful in rolling back ARS’s immediate efforts to close and convincing members of Congress USSES has value to the entire industry. USSES is so unique and central to solving the issues in the management of bighorn and domestic sheep grazing interface; we must preserve it.

Again, progress made – your advocate association ASI at work for you. The very reason those insightful founders some 150 years ago organized and we uphold today.

Sometimes progress is slow but the direction is positive for the industry and would not be possible if not for your collective membership, leadership of ASI and dedicated staff members. So as we round the turn on the cycle of life and head towards summer pasture with the ewes and lambs, we are as a group rounding the turn on the legislative effort to preserve and protect our industry and livelihood. Let us keep our eyes focused on the track ahead. Be aware of your surroundings. Plan for the wreck in the next lane and always keep your knees up for you know not the location of the next hurdle.

Thanks for your continued membership and support.