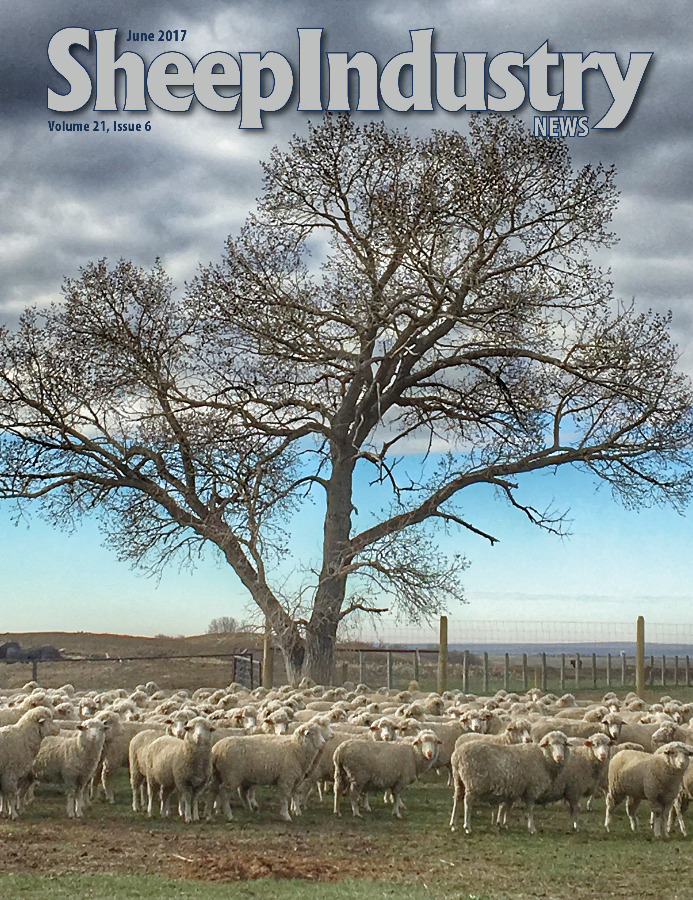 Not since mid-2011 have we seen slaughter lamb prices at auction surpass $200 per cwt. It was shortly after the 2011 boom that prices dropped into the $80s per cwt.

Since 2012, auction prices have bounced around, hovering between $130 and $170 per cwt. Slaughter lamb prices averaged $175 per cwt. in April 2017 at the Sioux Falls (S.D.) Regional Livestock auction and $202 per cwt. in early May. Lamb packers were bidding up prices trying to secure tight slaughter lamb supplies.

Feeder lamb prices in direct trade averaged $197 per cwt. in April, 15 percent higher monthly. Prices were 26 percent higher year-on-year and 35 percent higher than its five-year average for the month. In April, 88 percent (close to 14,000 head) of direct trades were from California at an average 117 lbs. for $186 per cwt.

Feeder lamb prices at San Angelo (Texas) and Sioux Falls auctions averaged $230.28 per cwt. in April, up 4 percent monthly and up 18 percent year-on-year.

Live, auction prices averaged $170.69 per cwt. in April – an unprecedented 15 percent gain. April’s average was 24 percent higher year-on-year and 27 percent higher than its five-year average for the month.

Prices rose into the mid-to high $170s per cwt. in South Dakota and Iowa, and up into the high $180s in Colorado. San Angelo gained only marginally to $141 per cwt.

Reports out of the Worthing, S.D., auction reveal that commercial buyers were active in April, scrambling to secure hard-to-find lambs ready for harvest.
Live, negotiated prices average $156.76 per cwt. in April, up 7 percent monthly with weight gaining 11 percent to 168 lbs.

The comprehensive price series (live, negotiated and carcass-based formula) averaged $293.67 per cwt. in April, up 8 percent monthly. Its live equivalent was $147.09 per cwt.

In the week before Easter Sunday, leg cuts – both bone-in and semi-boneless – were the most widely advertised lamb items with the general price trend steady to firm (U.S. Department of Agriculture’s Agricultural Marketing Service, 4/17).

In the week before Easter Sunday, the feature rate was 45 percent – the portion of stores sampled that reported lamb advertising. The Activity Index was 19,570. This represents the absolute frequency of feature activity equal to the total number of stores for each advertised lamb item.

In the first 16 weeks of the year, estimated lamb harvest totaled 608,743 head, down 1 percent year-on-year. Estimated lamb production was 43 million lbs., also down 1 percent. Dressed weights were up from 70 lbs. to 71 lbs. between periods.

Cold storage stocks have been drawn down dramatically in the course of the last year. Since February 2016, stocks have fallen 46 percent. In April, lamb and mutton freezer inventories averaged 25.5 million lbs., a low not seen since early 2014.

According to USDA/AMS and the Livestock Market Information Center, lambs on feed in Colorado as of May 1 totaled 95,100 head, down 19 percent from last month and down 26 percent from May 2016. This is the lowest total in May since 2010, and the second lowest number on feed since tracking data. This figure might or might not capture the national feeding trend, for it omits lamb feeding on the West Coast (as well as in the Midwest).

Australian lamb and mutton supplies are tight this year, likely leading to record-high prices. Increased interest in ewe retention, high wool prices and lower corn has prompted a surprise contraction in lamb harvest (Meat & Livestock Australia, 4/2017). The result is an expected 2017 lamb slaughter of 21.5 million head, down a further 500,000 head from what was originally forecast for 2017, and down 1.5 million head (6 percent) from the 2016 record. As a result, both lamb and wool markets are expected to be the “strongest ever (MLA, 4/2107).” MLA anticipates that production will be tight from May through September in Australia until the new season supplies enter the market.

The net carcass value, including processing and packaging costs, rebounded to above $300 per cwt. in April at $310.65 per cwt., 8 percent higher monthly and about even with a year ago. USDA/AMS updated the total cost of packaging and processing in early January, increasing the rate from $33.75 to $44.85. The rate increase reflected increases in costs since the last update in 2014. This change puts the net carcass value $11.10 per cwt. lower than corresponding 2016 values.

Starting Jan. 9, 2017, USDA/AMS updated industry yields in the calculation for carcass value reporting. Small changes were made by the packing industry in cutting primal cuts. For example, the 504 rib rose from 11.00 percent of the total carcass weight to 11.42 percent of the carcass.

It is the best of both worlds, suggested Roswell Wool Manager and ASI President Mike Corn. Not only are wool prices strong, but wool quality is very good. Wool quality is the best it has been in several years. Wool is clean with higher yields and minimal contamination. Through education, wool growers have learned to run their hair sheep flocks separate to minimize contamination. Furthermore, vegetable matter contamination is low.

In the first week of May, the Australian Wool Exchange Eastern Market Indicator averaged U.S. $5.20 per lb. clean (AWEX, 5/5/17). The Australian wool market saw a short-lived retraction in prices earlier this year, but has begun its upward march – a trend persistent since late 2015.

The outlook continues to be positive, leading to an expectation that the upward momentum is likely to continue through mid-May (WTiN Wool Market, 5/8/17).